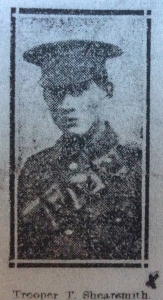 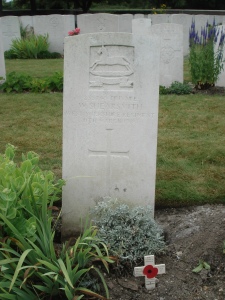 Thomas William Shearsmith was one of the youngest of 9 children and he had a half-brother, Philip, who was born in Scalby.  His parents were Edward, a coachman, and Mary Ann Simons who died in 1909.  His father married Mary Ann Coggan the same year.  The 1891 Census shows that the family lived in North Ferriby, having lived in Lincolnshire for many years.  In 1911 the Shearsmiths were living at The Holt Stables on Scalby High Street, where Edward was coachman to Sir William Shaw Wright, Chairman of the Hull and Barnsley Railway Company, who bequeathed him £50 when he died in November 1914.  Tom, aged 14, was described on the 1911 Census as a grocer’s errand boy. 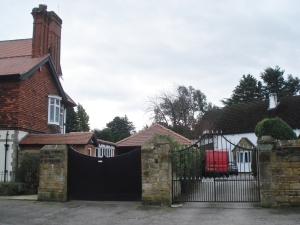 The Stables at The Holt, where the Shearsmith family lived 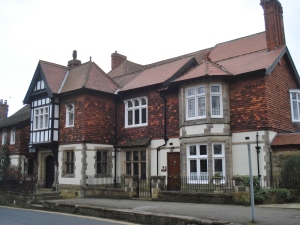 Tom’s elder brother Robert entered France with 3Bn East Yorkshire Regiment on 15 January 1915 and died of wounds at 33rd Field Ambulance Station on 5 December 1916 on The Somme.  By this time he had transferred to 6th Battalion (Pioneers) and was wounded in Railway Alley Trench.  He is buried in Mesnil Community Cemetery Extension, just north of Albert.  At the time of his death Robert had 3 sons and a daughter under 7 years old.

Tom’s Army Service Number, 2520 reveals he joined the Yorkshire Hussars (Alexandra, Princess of Wales’ Own) between 1 September and 12 October 1914.  The regiment was headquartered in York and formed part of the Yorkshire Mounted Brigade.  In April 1915 the regiment was split up.  C Squadron joined 49th (West Riding) Division and landed at Le Havre on 16 April 1915.  Tom’s Medal Rolls Index Card shows he landed in France on 15 April.  On 10 May 1916 the regiment was reformed and became XVII Corps Cavalry Regiment.  On 26 August 1917 the regiment was dismounted and sent to Etaples for infantry training and on 13 November 1917 400 men were officially absorbed into 9th (Service) Battalion of the West Yorkshire Regiment, which now adopted the title 9th (Yorkshire Hussars Yeomanry) Battalion.

The War Diary of 9th West Riding Regiment reveals that on October 10/11 1917 they were reinforced by 1/1 Yorkshire Hussars numbering 20 Officers and 396 Other Ranks.

There followed a period in the front line and support, interspersed with training.  When the weather permitted, patrols were often sent out.  The Unit War Diary reveals that Tom Shearsmith spent Christmas 1917 at Busnettes, north-west of Bethune, with special attention being paid to musketry, bombing and bayonet training.

On 5th February 1918 the Battalion relieved 6Bn York and Lancs on the Cambrin right sub sector.  The War Diary explained No Man’s Land along the whole front is a continuous line of craters mostly containing water and others full of wire.  Several posts are on the lip of these with the enemy post on the other side.  Weather mild and very dark at night.

The diary entry for Tom Shearsmith’s last week reveals the Battalion proceeded to Mazingarbe on 5 March, where they were in Divisional Reserve to 11th, the day he was killed, when they relieved part of 6th Bn Dorset Regiment and part of 6th Bn Lincoln. Regiment in the left sub-section of the HULLUCH SECTOR.  There is no mention of any losses that day.

Thomas William Shearsmith is buried in Philosophe British Cemetery, Mazingarbe.  His burial record shows his body was brought in from Hulluch into this ‘concentration’ cemetery in early 1921.  His headstone bears the name ‘William Shearsmith’ though the records show him as Pte T. Shearsmith and give his mother as Mrs E Shearsmith of 62 St George’s Road, Hull.

The Scarborough Mercury of 22 March 1918 reports News has reached Scalby that Tom Shearsmith has been killed in action.  He was brought up at Scalby, where his father was employed prior to going away to Hull, and Tom joined the army whilst still living at Scalby, as did a brother.  Much regret will be felt by his many friends in the Scalby district.