Commemorated on the Arras Memorial, Bay 3 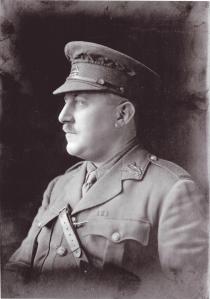 Richard Wilkinson (known to the family as Peter) was the youngest son of William Wilkinson, owner of Victoria Corn Mill in Skipton where he employed 17 men, and Elizabeth Sagar of Leeds, daughter of an Attorney at Law.  He had two brothers and a sister.  In July 1910 he married Violet Glaister Walmsley, daughter of Revd. Silas Walmsley, a Methodist Minister from Lancashire.  During their 7 year marriage they had 2 sons; Richard and John who were both under 6 years old when their father was killed in action.  Richard’s nephew, Capt. Thomas William Musgrave Wilkinson, son of his brother William, was killed in action on 20 July 1918, serving with 8th Battalion (Prince of Wales Own) West Yorkshire Regiment.

The Wilkinsons were a military family who lived in Southport and Scarborough.  Whilst her husband was serving with the army, Violet and her children spent a lot of time living at Crimbles Court on Scalby Road, in Scarborough, the home her sister Edith and brother in law Halliday Huggan had built in 1909. 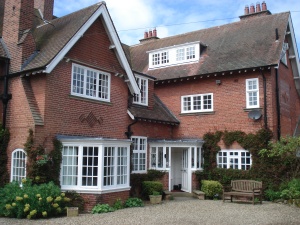 Richard Wilkinson was a 2nd Lieutenant serving with 3rd Battalion (Prince of Wales Own) West Yorkshire Regiment in the 2nd Boer War and was promoted Lieutenant in February 1900 but was subsequently invalided out of the army. When the First World War broke out he rejoined, and was gazetted a temporary Lieutenant in 9th Battalion of his old regiment, on 4 January 1915.  The 9th Battalion sailed from Liverpool to Gallipoli on 3 July 1915, via Mudros, and landed in Suvla Bay on 6 August, the same day that Major John Sillery, brother of Lt Col Charles Sillery who is also remembered on the Scalby War Memorial, landed there with 11Bn Manchester Regiment.  Richard was luckier than John Sillery, and survived the Gallipoli Campaign, although he was injured and was again invalided out.  By this time he had risen to the rank of Captain.

Determined to ‘do his bit for his country’ Richard Wilkinson enlisted as a Private in 13th Battalion of the Royal Fusiliers (City of London Regiment) serving on the Western Front from 19 November 1916.  He died 5 months later during the 1st Battle of the Scarpe, which was part of the Battle of Arras.  On Easter Monday, 9 April 1917, the Canadian Corps captured Vimy Ridge to the north.  In the south the allies were attacking the heavily fortified Hindenburg Line.  The 13th Bn Royal Fusiliers, part of 37th Division, took part in the attack on the village of Monchy le Preux.  By 7.40pm on 10th April the fighting had been so hard that only three officers beside the C.O. and adjutant remained with the battalion, who had to dig in and complete a provisional line of trenches, completed by 4am on 11th.  About an hour and a half later they made a last spurt forward and established themselves north of the village, holding the position throughout the day, enduring a terrible snowstorm, and during the fighting Richard Wilkinson was killed.

The Scarborough Mercury of Friday 11 May 1917 reports, The sad news has reached his wife that Mr R H S (Peter) Wilkinson, Royal Fusiliers, has been killed in action, a letter having been received from Corpl. Etherton, at present in hospital in the South of England, stating that deceased died peacefully on the battlefield, and also enclosing a small photograph of Mrs Wilkinson and their two children.  Mr Richard Hartley Sagar Wilkinson was well known in Scarborough district.  Educated at Cheltenham College, he served with the West Riding Militia in the Boer War, and was subsequently invalided out of the army.  He rejoined the colours early in the present war, serving as a captain in Gallipoli, but was again invalided out.  Last year he again rejoined, however.  He had lived in Scarborough, residing in Scalby Road until he rejoined, and his family who have been staying in Southport have a house at Scalby.  Deceased was 41 years of age, was the youngest son of the late Mr William Wilkinson, St Mary’s Mount, Newton Park, Leeds, and a brother-in-law of Mrs Halliday Huggan, Scalby.  No official intimation has yet been received.

The Yorkshire Post reported Lieut Richard Hartley Sagar Wilkinson, killed in action, formerly lived at Scalby, near Scarboro’.  He was 41 years of age, and the brother of Mr W Musgrave Wilkinson, solicitor, Leeds.  Lieut Wilkinson served with the West Yorkshire Militia in the South African War.

Richard’s name is recorded on four separate war memorials; at Scalby, Arras, Notre Dame de Lorette and Leeds Grammar School.  The Arras Memorial records the names of almost 35,000 servicemen from the UK, South Africa and New Zealand who have no known grave. The Ring of Remembrance at Notre Dame de Lorette was opened on 11 November 2014 by President Francois Hollande, accompanied by Chancellor Angela Merkel of Germany and British Prime Minister David Cameron.  The memorial records the names of 579,606 men and women of all nations who fell in action in the Pas de Calais in the First World War.

Richard Wilkinson was educated at Leeds Grammar School, which he joined in 1888, and his name is included on their Roll of Honour http://www.gsal.org.uk/alumni/gsal-roll-of-honour/ 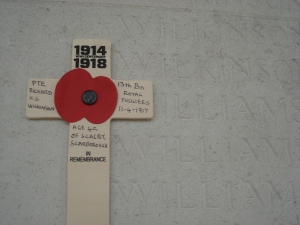 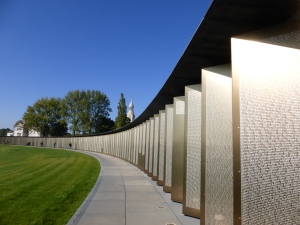 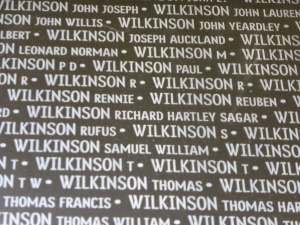 RHS Wilkinson’s name on the Ring of Remembrance

Thanks to Richard Wilkinson’s granddaughter, Christine Guy, for his photo.