John Watson in his uniform as a ‘gentleman’s manservant’ in Scalby. From ‘Village Tales’ by Alan Whitworth.

Killed in Action 25 March 1918 during the German Spring Offensive

Remembered with Honour on the Arras Memorial, Pas de Calais

John’s father, John Anderson Watson married Annie Eliza Smith in 1884.  Both were from Whitby where John senior was a Railway Porter but by 1911 the family had moved to Greetland in Halifax to work in the woollen trade.  They had 11 children, of whom 9 survived by 1911.

John did not move to Halifax with the rest of his family: the 1911 Census reveals he was living at 4 Jubilee Terrace, Scalby Road, Scalby with Mrs Hannah Kidd, a widow, and her 46 year old daughter, Frances.  John is described as a Domestic Gardener.  A photo of John dressed as a manservant appears in ‘Village Tales’ by Alan Whitworth, which is based on the scrapbook compiled by local girl Milly Kidd and her parents.

We can tell from John’s Army Service number, 2742, that he enlisted in the Royal Gloucestershire Hussars Yeomanry between 16 September and 7 October 1914.  On 15 April 1915 they sailed to Egypt on board the SS Minneapolis, disembarking in Alexandria on 24 April and making camp at Chatby Beach.  On 11 August they received orders to embark for Gallipoli, less four officers and 100 other ranks who remained to tend the horses.  They disembarked at Suvla Bay and joined 1st South Midland Brigade as part of the British 2nd Mounted Division.  On return to Egypt they took part in many of the battles that formed the Sinai and Palestine Campaign, primarily as part of the Imperial Mounted Division, and would have been present at the Battle of Beersheba, 31 October 1917.

At some stage John transferred to 2nd Battalion Worcestershire Regiment, and later to its 14th Battalion, the Severn Valley Pioneers, under the orders of the 63rd (Royal Naval) Division.  Pioneers were skilled labourers who supplemented the work of the Sappers in the construction of redoubts, emplacements and other field works.  In October 1916 they moved to The Somme  and later fought in the Battle of Arras and at Passchendaele where they laboured behind the battlefront at various tasks under heavy shellfire.

John’s record in the UK Army Registers of Soldiers’ Effects states that he was presumed to have died on or since 25 March 1918.

From 21 March the German Army, which had transferred very large forces from the now-collapsed Eastern Front, commenced a series of large scale offensives.  The first, Operation Michael, struck at the British Third and Fifth Armies and Private John Watson died during what became known as the First Battle of Bapaume, 24 – 25 March 1918.

The battalion’s experiences are recorded in great detail on the website of the Worcestershire Regiment.  The Pioneers of the 14th Worcestershire at Rocquigny received orders to precede the retreat of their Division and to prepare new positions on a line from Delville Wood, past High Wood to the ridge east of Flers. The Pioneer Battalion assembled and marched back, amid swarms of other retreating troops, past the ruins of Le Transloy across the shell-pitted ridges and up the slopes to that ridge between High Wood and Flers for which the British Fourth Army had battled in the Summer and Autumn of 1916. There they faced about and set to work on the preparation of defences. The desolate landscape was covered by retreating troops and the smoke of constant shell-bursts to the eastward marked the enemy’s advance.  March 25th had been a day of disaster for the troops of the Third Army south of the River Ancre. During four consecutive days and nights the officers and men of the 51st, 2nd and 47th Divisions, had marched and fought, without sleep and in many cases without food or water. By the fifth dawn they were physically exhausted; and, as we have seen; the German attack easily forced them back.

The troops of the 63rd Division were in slightly better condition. Until March 24th the Naval battalions had not been heavily engaged, although they had been under constant shell-fire and although the physical strain of the retreat had been severe. So when the full force of the enemy’s attack was developed on March 25th, the Brigades of the 63rd Division resisted longer and more steadily than did the troops on their right and left. The position held by the 63rd Division at dawn on March 25th was a line east of High Wood running north and south across the devastated ground of the old Somme battle-field. That position was maintained until after 11.0 a.m. Then the 2nd and 51st Divisions were seen retiring in the Ancre valley on the left, and the 47th Division likewise falling back past Longueval on the right flank. That retirement compelled the Naval battalions likewise to retreat. To assist their withdrawal the Divisional Pioneers, the 14th Worcestershire, were placed under the command of the 188th Brigade.

On the previous day (March 24th) the companies of the 14th Worcestershire, after successive retirements, had halted at nightfall. Headquarters of the Pioneer Battalion had been quartered at Martinpuich, “A” Company at Le Sars, and “B” and “C” Companies at Courcelette.

Early in the morning of March 25th “A” Company and “B” Company had been called in to join Battalion Headquarters at Martinpuich, leaving “C” Company at Courcelette under the orders of the 190th Brigade.

On receipt of orders from the 188th Brigade, Lieut.-Colonel Caldier Ladd took “A” and “B” Companies back from Martinpuich to the higher ground between that village and Courcelette. There the Pioneers hastily entrenched. On their left flank the line was prolonged by the reserve battalion of the 188th Brigade, the 1st Battalion Royal Marines. While the troops dug in, the Divisional R.E. (247th Field Company R.E.) blew up the few houses still standing in ruined Martinpuich.

In the Ancre valley on the left flank; disordered troops could be seen streaming back, and presently over the ridge in front came retreating the two front-line battalions (2nd Battalion Royal Marines, and Anson Battalion) of the 188th Brigade. The retreating troops came down the slope to Martinpuich and then up to the position of the Pioneers, passed through them and rallied in rear. Behind them great masses of the pursuing enemy came forward over the skyline.

The enemy were pressing the pursuit with the utmost boldness and companies and battalions in close formation could be seen advancing behind the leading waves.  As soon as the first lines of the German infantry were within range, the thin line of Pioneers and Marines opened rapid fire, with rifles and Lewis guns.  The first line of the enemy was checked, but the supporting troops behind could be seen steadily advancing.

When the first onrush of the enemy had been checked, the Marine battalion was ordered back to a fresh position.  The 14th Worcestershire covered their retirement and faced the enemy alone.  On the right the Battalion’s flank was unprotected, on the left flank the advancing enemy were nearing Grandcourt; but the Pioneers held firm, taking good cover in the shell-holes which pitted the desolate battlefield and shooting rapidly whenever the enemy attempted to advance.  For two hours the Battalion held up the enemy’s attack.  During that time Captain HV Maben was conspicuous by his bravery, reorganising and controlling the line under close and heavy fire (he was awarded the DSO): 2/Lt HW Woods, although wounded, remained in the front line, firing a Lewis gun after all the gun team had been hit, and inspiring his men to resist to the last (he was awarded the Military Cross).

Presently, batteries of the enemy’s field artillery came trotting forwards over the skyline east of Martinpuich, unlimbered in the open and commenced to bombard the defensive line.  Casualties became heavy.  Lt Col Caldier Ladd was severely wounded and was sent back on a stretcher.  Unfortunately the stretcher party lost their way and were captured by the advancing enemy.  The Colonel died of his wounds and many of his men were struck down.  At 2.30pm Major DN Rowe, the sole surviving senior officer, decided that the remnant of the Battalion must retire if they were to avoid annihilation.

So effectively had the fire of the Pioneers checked the enemy that they were able to withdraw back over the ridge they had held, although the nearest of the enemy were within a hundred yards. The two companies made their way down into Courcelette and up across the shell-holes to the heights beyond, near Mouquet Farm.

That position was held until the remnant of the 188th Brigade had fallen back from Courcelette; then orders were given for a further general withdrawal to the line of the Thiepval Spur. The company went down across the valley to Thiepval, marching steadily: the only unit of the whole Division which was still in good order. On the eastern side of Thiepval the company deployed, but almost at once a message was signalled back that the enemy were breaking through the centre of the line in front. The Pioneer company was ordered forward to fill the gap. The company was about to advance, when Captain Watkins saw a force of the enemy pouring forward over the skyline on to the undefended left flank of the Brigade. The previous order was cancelled, and the Brigade-Major of the 190th Brigade led “C” Company to guard the threatened flank. Captain Watkins deployed his platoons amid a tangle of old trenches and shell-holes (practically the site of “Hessian Trench,” held by the 3rd Battalion in October 1916) and for some time held back the enemy. But the attack was in too great force to be denied. In face of overwhelming numbers, the Pioneers gradually withdrew, a platoon at a time, covered by the fire of the rest. Captain Watkins was badly wounded but continued to direct the withdrawal so long as his strength remained, helped along by his men, who fell back in good order to the ruins of Thiepval (he was subsequently awarded the M.C.). There a fresh defensive line had been established by the other troop of the Division. The Pioneers passed through the village, made their way down the slope, and rejoined the remnants of the other companies of the Battalion in Thiepval Wood.

The enemy’s pursuit died down, and the three Brigades of the 63rd Division were able to reorganise. Eventually the 189th Brigade, with “B” Company of the Pioneers, were left in Thiepval Wood, while the front line above the wood was held by the 188th and 190th Brigades, to which were attached “A” and “C” Companies of the Pioneer Battalion.

Although the enemy’s infantry did not advance, the German guns bombarded the Thiepval position, and before the day was out Major Rowe had been wounded. The command of the 14th Worcestershire then passed to Captain Maben.  On 25 March the Battalion had 3 killed, 3 officers and 14 men other ranks wounded and missing, 20 other ranks missing and 4 officers and 45 other ranks wounded.

The confusion that the Germans’ swift advance had caused is illustrated by a short article that appeared in the Scarborough Mercury of 19 April that reported, Private John Watson, formerly employed by Mr HJE Marsden, Scalby, was wounded and a prisoner.  Although the Germans took a large number of prisoners during the Spring Offensive, many of whom spent the rest of the war in prison camps, there is no record of John Watson in the Red Cross archives and it seems likely that he was one of the wounded and missing.  His name is recorded on the Arras Memorial. 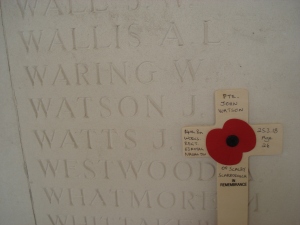