George Henry Bowman was the eldest of eight surviving children according to the 1911 Census, where it is noted that four others had died.  His parents were Bell Bowman, and Ellen Jane Southwick, who had married in Cloughton just 3 months earlier, when Bell was 26 and Ellen 19.  The 1891 Census reveals that the family lived in the countryside on Cumboots Lane and Bell was an agricultural labourer.   George was baptised at St Mary’s Church, Cloughton on 28 October 1894 and attended Burniston and Cloughton village school from 21 March 1898 but for whatever reason left it after less than 3 months, on 13 June. By 1911 the family had moved a few miles south down the Scarborough to Whitby road, to live in Newby.  Bell was now a Cowman and 16 year old George was a grocer (assistant salesman).  When he enlisted in the army he was living in Withington, Lancashire.  He does not appear to have any relations living there so it is not known what made him travel there.

George enlisted in Manchester via the Derby Scheme between late November and mid-December 1915.  It would appear that he joined 13th Battalion Lancashire Fusiliers which was converted into 15th Training Reserve Battalion of 3rd Reserve Brigade in September 1916, seemingly to supply replacements to the other Kitchener (Service) Battalions of the Lancashire Fusiliers.

George arrived at the large base camp at Etaples on 8 July 1916 and was originally meant to join 15th Battalion Lancashire Fusiliers.  He spent two weeks at Etaples at Number 23 Infantry Depot before he was attached to the 9th Battalion Loyal North Lancs Regiment, joining them on 23 July 1916.  They were part of the 74th Brigade, 25th Division.  George’s Battalion were known as The Salford Pals and they suffered dreadfully in the fighting on 1 July, the first of the 141 days that became known as The Battle of the Somme.

At the time George joined 9th Loyal North Lancs the 25th Division held a sector of the line north of the River Ancre.  Several attacks took place through August, near a German defensive position known as the Leipzig Salient.  On 3 September 1916 a larger scale attack was made in support of 4th Australian Division which was assaulting Mouquet Farm, a heavily fortified position in the German’s second line of defence which ran from Pozieres to Grandcourt, known to the British as ‘Mucky Farm’.  The 25th Division attacked at 5.10am from the Hindenburg Trench to the south of the Wundtwerk, or ‘Wonder Work’ German defensive position.  All managed to enter the German line but were unable to consolidate and were forced to withdraw.  The Division was relieved on 11 September.  On 3 September 1916 there were 37 fatal casualties recorded by the 9th Loyal North Lancs, which included George Bowman.

George has the unusual distinction of serving in a Battalion with which he never actually fought, although his headstone in Pozieres British Cemetery, Ovillers-la-Boiselle, records the Lancashire Fusiliers as his regiment.

His death was reported in the Yorkshire Post: Pte George Bowman, Loyal North Lancashires, of Redleigh, Newby, Scalby, Scarborough, was killed by a shell along with three other men.  The Commonwealth War Graves Commission records show he was buried at Ovillers-la-Boiselle but exhumed in May 1919 by a Canadian reburial party and reburied in Pozieres British Cemetery.

Following her son’s death, Ellen Bowman received some monies and a War Gratuity payment.  She had been named as his sole legatee in his soldier’s will.  In 1939 she was living at 421 Scalby Road.  Bell Bowman died in 1933 and Ellen in 1942.  They are both buried in the churchyard at St Laurence’s, Scalby as is his youngest sister, Edith Minnie, and her husband Fred Hovington, who fought with the Yorkshire Regiment (The Green Howard’s) and survived the war. 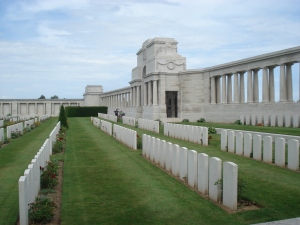 Special thanks go to Steve Bramley, for his work uncovering how it was that George Bowman came to be buried in Pozieres when his Battalion were many miles north of this cemetery on the day he was killed in action.