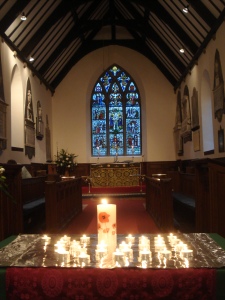 29 candles were lit during the service

At 11pm on Tuesday 4th August 1914 Britain’s ultimatum to Germany expired and war was declared.

The headlines in the Scarborough Mercury read, “Great European War.  Kaiser’s Defiance of the Nations.  Germans held up in Belgium.  Violation of Neutrality Laws.  England Determined.  Effect on Scarborough Season.”

Beside a front-page article describing events in London and ‘How Belgians met (the) invaders’, are paragraphs reporting that time-expired naval men were being called up, and there was ‘no need to panic’ regarding the supply of flour and other provisions. Despite this, some prices had already gone up, notably that of sugar.

The North Eastern Railway Company cancelled its excursions for the Bank Holiday weekend. The paper reports, “Much excitement prevailed, for it was realised on all hands that the Bank Holiday Monday would be a failure as far as those who catered for excursionists were concerned.  Fortunately, five trains from foreign lines reached Scarborough on the Monday, and much business was done by coblemen in taking out visitors to view a number of torpedo-boat destroyers.  It was later announced that all excursions had been cancelled until further notice.”

The British Expeditionary Force assembled in France with impressive speed.  This included several Scalby and Newby men; all members of the regular army.  Lance Corporal Albert Dunkley was the son of a Quartermaster at the Scarborough Barracks on Burniston Road.  The family lived on Church Becks, next to Scalby village school.  A cavalryman, Albert took part in the Battles of Mons and the Aine but has the dubious distinction of being the first-named on our war memorial to die, being blown up in a trench outside Ypres on 28th October.

A week later he was followed by Captain J Lionel Wordsworth, of The Glen, on Hay Brow Crescent.  Lionel came from a wealthy family.  His father had died the day before his first birthday and his mother remarried a retired wine merchant from Scarborough.  By the time he was 18, Lionel was living with his older brother William, their former governess, Edith Allen, and 4 servants.  Their coachman was William Webb, father of Albert Webb on our war memorial who was killed in action near Amiens in 1918.

Lionel had joined the Militia in 1900 and passed the examination to become a 2nd Lieutenant in the 5th (Royal Irish) Lancers.  He too survived Mons and the Aisne but died in a bombardment behind the lines south of Ypres on 4 November.

The telegram that arrived at The Glen read, “Deeply regret to inform you that Lieut J L Wordsworth 5 Lancers was killed in action 4 November.  No further details.  Lord Kitchener expresses his sympathy.”

William Wordsworth, later to become Sir William in the King’s Birthday Honours of 1937, and a Churchwarden at St Laurence’s for many years, wrote to the War Office asking, if it was possible for him to recover the kit of his brother. He explained that he was “especially anxious” to recover Lionel’s sword .

Sadly the National Archives’ records do not contain a reply.  William Wordsworth also promptly replied to the War Office’s query about whether he would like to receive Princess Mary’s Christmas Gift, to which his late brother was entitled.  This was a decorative brass tin containing items for smokers, a Christmas card and photograph of the Princess.  He told them it was something he would “greatly value.”

On 4 February 1916 The Scarborough Mercury reported that “Following a Communion service at the Scalby Parish Church on Saturday morning at eight o’clock, the dedication took place of the memorial placed in the church last week by Mr William Wordsworth to the memory of his brother” and went on to explain, “The design is of a chaste and beautiful character, subdued and delicate in colouring.  Four life-size figures appear, representing St George and St Michael in the centre, and St Peter and St John at the sides.”

Norman Bogie, a well-known member of our church, has put forward the plausible theory that the face of St George, the second figure from the right, is based on the face of Lionel Wordsworth.  Certainly, I don’t recall seeing any other figures of saints in stained glass windows, sporting a trim moustache!

In 1917 William Wordsworth presented the village with the gift of a War Shrine. This was a wooden board displaying the names of 190 men and 2 women who had served, or were serving their country in the war.  It was sited next to the Jubilee Fountain on the triangle of grass opposite the present Vicarage.

When the war memorial in our churchyard was unveiled in April 1921 the Scarborough Mercury reported that there were “A large number of wreaths and flowers” placed at the foot of the memorial, including one from Mr and Mrs Wordsworth and another from Miss Edith Allen, Lionel Wordsworth’s former governess and housekeeper.

Lionel left his medals to his brother.  They were sold at auction in June 2013 for £980.  It has not been possible to find out who sold or bought them, but I hope they find their way to his regimental museum.

2 thoughts on “A Story of Two of the Fallen”